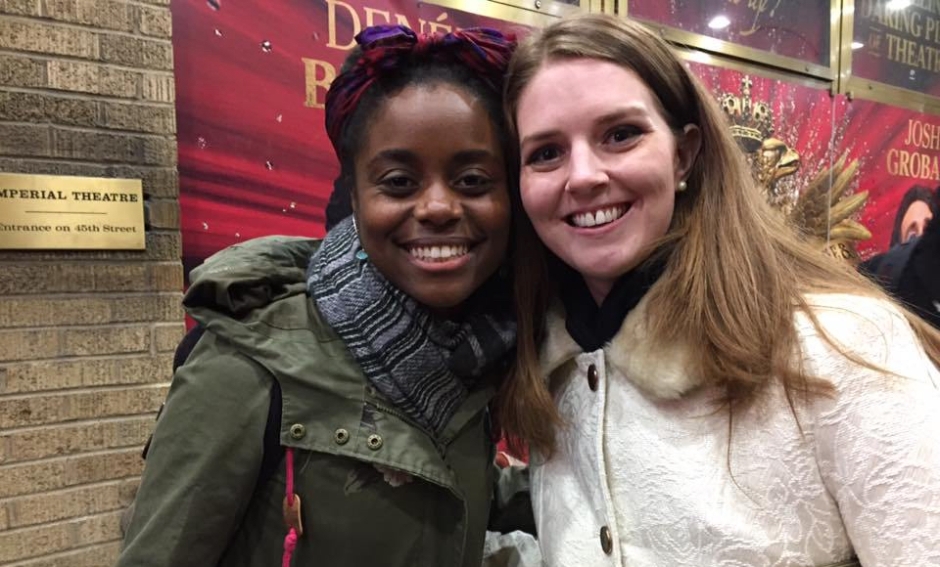 In honor of Josh Groban’s last week on Broadway as Pierre in the Tony-nominated “Natasha, Pierre and the Great Comet of 1812,” I thought I’d do a little roundup of some of my favorite things about the show. Like many longtime Josh Groban listeners, I fell into the Great Comet fandom by chance. I’ve been inspired by his music since middle school, so when he announced that he’d be starring in his first Broadway show, I knew that I was going to do everything in my power to see it (read: dip into that emergency savings account).

For most of 2016 (and all of 2017, too, if we’re being honest) I was obsessed with “Hamilton” like every other basic Broadway-loving gal. I bought my tickets to “The Great Comet” as soon as they went on sale in spring 2016, still not knowing quite what it was, and then went back to merrily singing along to “Helpless.”

During the week leading up to the big trip to New York, I gave Ham a break and switched over to listening to the original cast album for the Great Comet. I strategically rolled and stuffed sweaters, gloves and scarves into my carry-on (I’m a Florida girl and the idea of November in New York terrified me), all while soaking in the complexities of the music and Tolstoy’s “War and Peace” plot.

This is … different, I thought as Spotify transitioned from song to song: poetic and literary, but decidedly not singsongy. There was a bit of rock, a bit of folk, a bit of electronica and at times a bit of cacophony. And then — a familiar voice. Is that Eliza Hamilton? I didn’t realize Phillipa Soo was in the original, non-Broadway cast. As the album ended I was perplexed, delighted and excited to hear Josh Groban’s take on Pierre.

After seeing the show during the last weekend of previews, I left the theatre awestruck and inspired. It was truly an experience like none other. And that’s exactly how I explain it to people — it’s not a show, it’s an experience. So, instead of doing a regular, glowing Great Comet review, I thought I’d try to narrow down some of my favorite things about this gem.

By now you know that the Great Comet is unlike anything else on Broadway, and a lot of that has to do with the set (for which Mimi Lien won a Tony). I was first introduced to the set months before I entered the theatre when I purchased my tickets online. Instead of just orchestra and mezzanine, there were also banquet-style stage seats and upholstered stage seats. I opted for the banquet stage seat, which was going out on a limb when I booked because I couldn’t actually choose my seat. We ended up with great seats, but honestly, I don’t think there’s a bad seat in the house because the cast is everywhere (more on that later).

On the day of the show, the set was present as soon as my mom and I entered the theatre. It was a bit jarring at first. As we walked into the Imperial Theatre, the walls were green, gray and dingy, covered with what looked like leftover fliers from a decade of grunge rock shows. I had only been to one other Broadway show and that was a full six years prior, so I wasn’t quite sure what to expect. I thought Broadway was supposed to be fancier, I said to myself as we made our way through the line to enter the theatre. As we got closer to the second set of doors, it became apparent that it was all part of the show. Affectionately named the “bunker,” the space was designed to evoke a soviet Cold War feel infused with a hint of an underground lounge vibe. 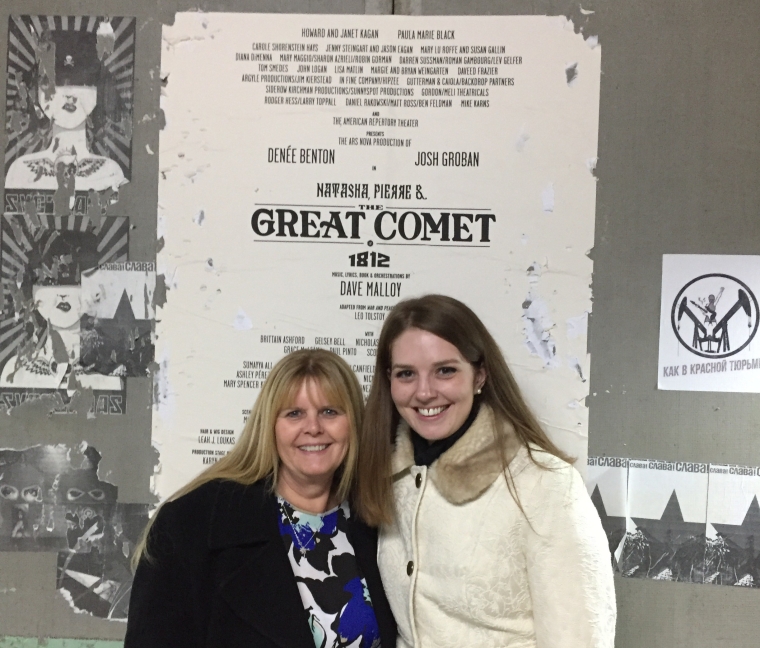 After our tickets were scanned, the majority of the audience headed to the left, while we were directed right, up a winding constructed staircase that was technically backstage. It led us through the infamous double doors that feature prominently in the set and onto the stage of the extravagant theatre. It felt like the furthest thing from the lobby. Instead of a war-torn dance club, it was like a decadent palace, draped with red velvet curtains everywhere. The walls were sprinkled with paintings and decorations, including a life-size portrait of Napoleon. We were ushered to our plush banquet seats, complete with an adorable little side table that separated us from the patrons sitting next to us. It felt like a luxurious, private theatre experience.

The best thing about the set design is that, while we technically sat on the stage, the entire theatre acted as a stage. Stairs led up from the main stage to the mezzanine and a runway snaked through the orchestra clear to the back of the theatre. The staging is truly immersive and innovative. As the composer, Dave Malloy, has said, it’s like being in a Russian supper club. And how I love to dine in Moscow!

The music of “The Great Comet” is so uniquely diverse that it can be a bit disarming to listen to it for the first time. There is a full breadth of musical experiences, from your traditionally breathtaking aria to full-on dance party numbers and choral hymns. It’s powerful and meaningful and breaks all of the rules, all while being distinctly profound, and in some cases, just for fun.

“Pierre” introduces you the titular character and drops some major truth bombs that might just make you rethink the way you look at life — all without the traditional rhyme structure that we’re accustomed to in musical theatre. Instead, there’s a deliberate literary quality to it all. Characters narrate their actions, sometimes quite literally. And did I mention that it’s completely sung-through?

The sung-through musical is a frightening and powerful thing, and no doubt taxing on the cast. But the performers in “The Great Comet” pull it off flawlessly while being on stage almost the entire time. And despite having a large, diverse cast, Malloy ensures that each character is featured and stays at play throughout the show. As an audience member, you go on a journey through stages in life as you understand the actions of each character through song: the unabashed and wide-eyed innocence of Natasha, the existential longing of Pierre, the fierce friendship of Sonya, the shrilly protective wisdom of Marya, the jaunty frivolity of Anatole and even the spiteful lasciviousness of Hélène. I left without looking at anyone as a villain, but instead commiserating with each character’s unique background and outlook. And because this show is all about the complexities of human nature, I found myself reflecting on my own life experiences, seeing a bit of myself in so many of the characters and the songs they performed.

But the musical characterization doesn’t end with the human characters. Even the comet itself has a voice all its own. Spoiler alert, but my favorite moment of the experience came during “The Great Comet of 1812,” at the very end of the show. During a moment of enlightenment, there is a subtle rise as an angelic chorus joins Pierre, gazing at the comet. At first, I didn’t know where the voices were coming from: Normally the ensemble cast and accompanying musicians are clearly visible. But as the lights changed and the voices became stronger, I realized that the cast members were strategically sprinkled throughout the audience, harmonizing from lone seats around the entire theatre. It was a rapturous moment of beauty that I will never forget.

A Cast of Friends

While some ensemble casts are just part of the background, at “The Great Comet,” they’re not just in the foreground — they’re on the main stage, in the orchestra and the mezzanine.  There truly isn’t a bad seat in the house, because no matter where you sit, the cast will be there. Before the principals came out, we were welcomed by the lively cast with dumplings, the first taste of how interactive the show would be. From then on, more and more characters swung by to interact with us — whether it was passing out handwritten love letters, egg shakers, or Dolokhov asking my mom to hold his guitar so he could go dance. We were uniquely connected to the show from every angle. 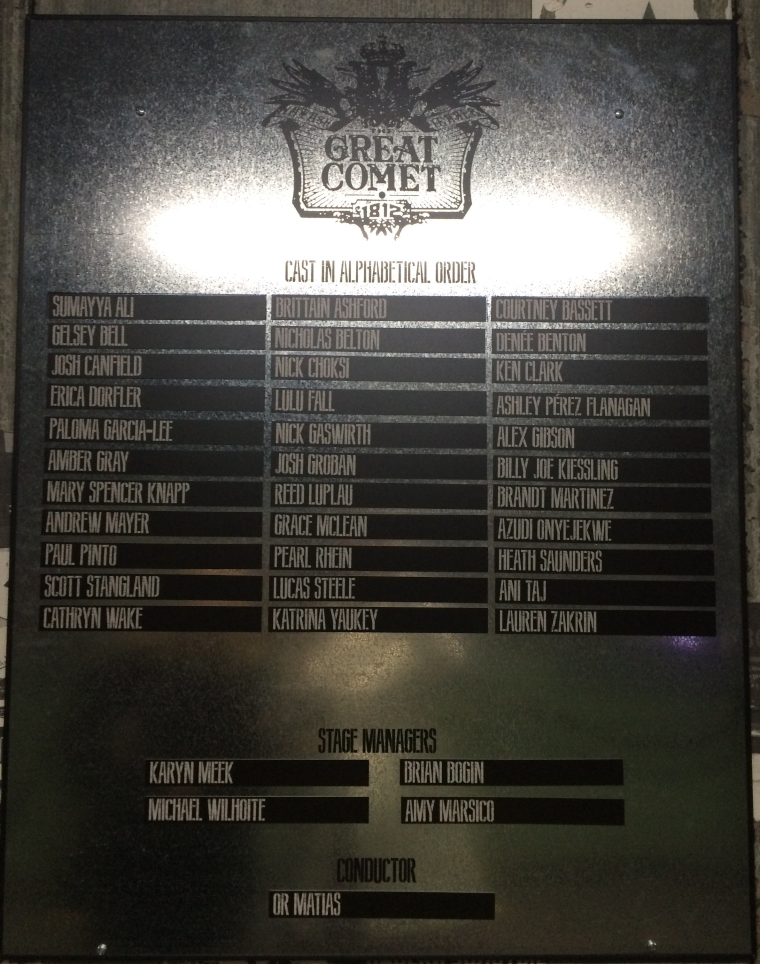 So, back to the beginning. The cast members who passed out dumplings to our section hyped us up, so we felt like we knew them as the show went on. They’re more than just background singers and dancers. The talent is through the roof, as part of the ensemble is actually the orchestra. Throughout the show, they’re running around, dancing and playing instruments. And I don’t mean “playing” instruments just for appearances. They are part of creating the music that fills the entire theatre. Not to mention the Principals who also play tunes in between singing. Josh Groban’s Pierre switched back and forth between the accordion and the piano, Lucas Steele as Anatole played the violin and Nick Choksi joined in on the guitar as Dolokhov. The skill and talent of the cast is unbelievably boundless and you can tell that they put their heart and soul into it every night.

From our banquet seats on the stage, we had a great view of even more intimate audience interactions. Natasha (shoutout to the Central Florida native Denée Benton, pictured above at stage door) and Mary squeezed in between patrons sitting at a little bistro table, while Anatole leaned into an audience member as part of a “Russian custom.” It’s a surprise every night as you never know how the audience will react to the action being so close. I feel like you could see the show ten times and have a different experience because you’ll be interacting with and seeing actors from new vantage points every time.

I could go on and on about why I love this musical. The more I listen to it, the more I enjoy it. Even if you can’t make it out to New York to see the show, give the album a listen and appreciate the unique mix of Russian folk music with just about every other genre imaginable. Bringing Josh Groban’s fan base to the show crossed so many barriers and introduced countless people from far and wide to a new perspective on musical theatre, including this gal right here. With innovative shows like “The Great Comet” as a new standard, I can’t wait to see what else theatre has to offer us in the years to come. If you can’t see Josh Groban before he takes his bow on July 2, don’t fear. Hamilton’s Okieriete “Oak” Onaodowan will take over as Pierre on July 3. Tickets are available online through Telecharge.

One thought on “3 Things I Love About ‘Natasha, Pierre and the Great Comet of 1812’”